RBG and the future of the Court 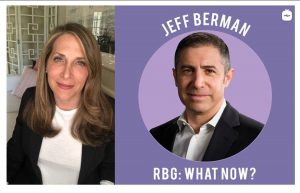 Justice Ruth Bader Ginsberg was an American icon. Fierce defender of women and human rights. She died tonight at 87.

This leaves a vacancy on the Supreme Court just weeks before the US election. Now the question is, will Senate Majority Leader Mitch McConnell and President Trump break with US tradition and rush a confirmation of another Justice before November 3? McConnell blocked President Obama’s nominee Merrick Garland who was named months before the election, on the grounds that a new president should shape the Court. What should we expect? How many Senators would it take to stop a rushed confirmation?

@jeffberman lays out some scenarios here. Berman is an advocate and activist and entrepreneur but for years served as Counsel to US Senate Minority Leader Chuck Schumer so he knows the ins and outs of the Senate. He sits on the board of @protectdemocracy and offers advice on the best way to ensure your vote counts this year.  CLICK HERE FOR INTERVIEW